# Interacting with Your API via the API Docs Tab

The Service Saved Successfully message which appears following successful generation of a new REST API is rather anticlimactic, because this simple message really doesn't convey exactly how much tedious work DreamFactory has just saved you and your team. Not only did it generate a fully-featured REST API, but also secured it from unauthorized access and additionally generated interactive OpenAPI documentation for all of your endpoints! If you haven't used Swagger before, you're in for a treat because it's a really amazing tool which allows developers to get familiar with an API without being first required to write any code. Further, each endpoint is documented with details about both the input parameters and response.

To access your new API's documentation, click on the API Docs tab located at the top of the screen:

You'll be presented with a list of all documentation associated with your DreamFactory instance. The db, email, files, logs, system, and user documentation are automatically included with all DreamFactory instances, and can be very useful should you eventually desire to programmatically manage your instance. Let's just ignore those for now and focus on the newly generated database documentation. Click on the table row associated with this service to access the documentation. You'll be presented with a screen that looks like this:

Scrolling through this list, you can see that quite a few API endpoints have been generated! If you generated an API for a database which supports stored procedures, towards the top you'll find endpoints named GET /_proc/{procedure_name} and POST /_proc/{procedure_name}. Scrolling down, you'll encounter quite a few endpoints used to manage your schema, followed by a set of CRUD (create, retrieve, update, delete) endpoints which are undoubtedly the most commonly used of the bunch.

Let's test the API by retrieving a set of table records. Select the GET /_table/{table_name} Retrieve one or more records entry:

A slideout window will open containing two sections. The first, Parameters, identifies the supported request parameters. The second, Responses, indicates what you can expect to receive by way of a response, including the status code and a JSON response template. In the case of the GET _/table/{table_name} endpoint, you have quite a few parameters at your disposal, because this endpoint represents the primary way in which table data is queried. By manipulating these parameters you'll be able to query for all records, or a specific record according to its primary key, or a subset of records according to a particular condition. Further, you can use these parameters to perform other commonplace tasks such as grouping and counting records, and joining tables.

To test the endpoint, click the Try it out button located on the right. When you do, the input parameter fields will be enabled, allowing you to enter values to modify the default query's behavior. For the moment we're going to modify just one parameter: table_name. It's located at the very bottom of the parameter list. Enter the name of a table you know exists in the database, and press the blue Execute button. Below the button you'll see a "Loading" icon, and soon thereafter a list of records found in the designated table will be presented in JSON format. Here's an example of what I see when running this endpoint against our test MySQL database: 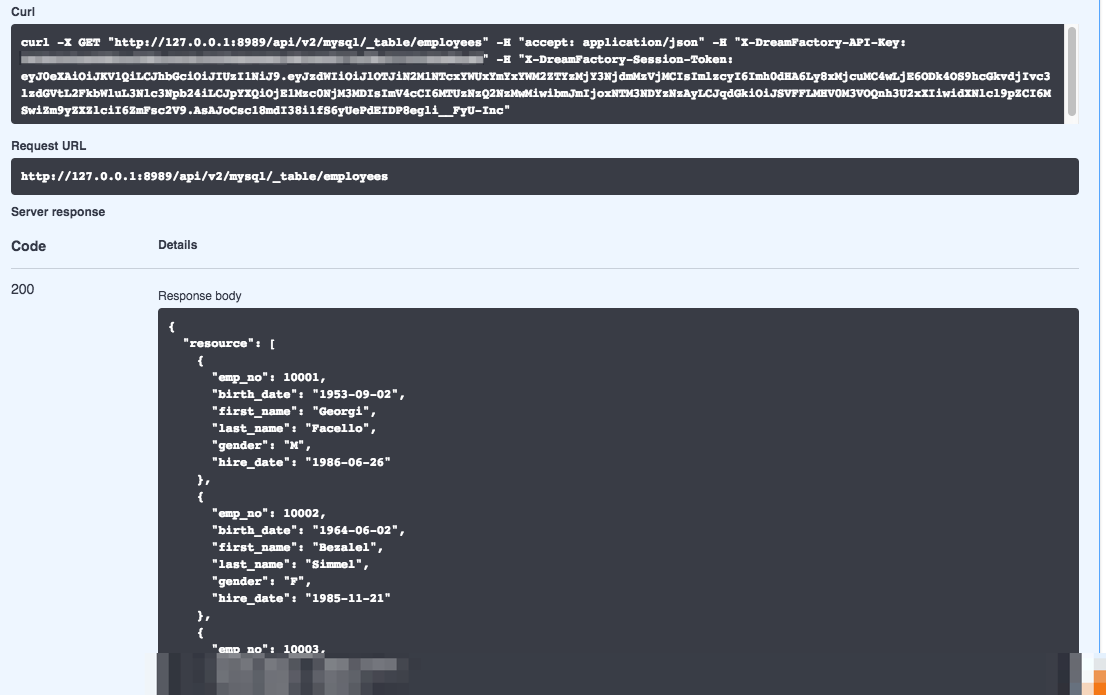 Congratulations! You've just successfully interacted with the database API by way of the Swagger documentation. If you don't see a list of records, be sure to confirm the following:

The API Docs interface is fantastically useful for getting familiar with an API, and we encourage you to continue experimenting with the different endpoints to learn more about how it works. However, you'll eventually want to transition from interacting with your APIs via the API Docs interface to doing so using a third-party client, and ultimately by way of your own custom applications. So let's take that next step now, and interact with the new API using an HTTP client. In the last chapter you were introduced to a few such clients. We'll be using Insomnia for the following examples however there will be no material differences between Insomnia, Postman, or any other similar client.

But first we need to create an API key which will be used to exclusively access this database API. This is done by first creating a role and then assigning the role to an application. Let's take care of this next.