DreamFactory does a very good job of generating APIs for a wide variety of data sources, including Microsoft SQL Server, MySQL, SFTP, AWS S3, and others. Naturally the generated API endpoints encompass the majority of capabilities a client is expected to require when interacting with the data source. However, software can rarely be created in cookie-cutter fashion, because no two companies or projects are the same. Therefore DreamFactory offers developers the ability to extend APIs through the integration of custom business logic.

The scripting interface is accessible via the Scripts tab located at the top of the DreamFactory administration console. Once entered, you'll be presented with a list of APIs hosted within your DreamFactory instance. Enter one of the APIs and you'll see a top-level summary of the endpoint "buckets" associated with that API. For instance, if you enter a database-backed API you'll see buckets such as _func (stored function), _proc (stored procedure), _schema (table structure), and _table (tables). For instance, this screenshot presents the top-level interface for a Microsoft SQL Server API: 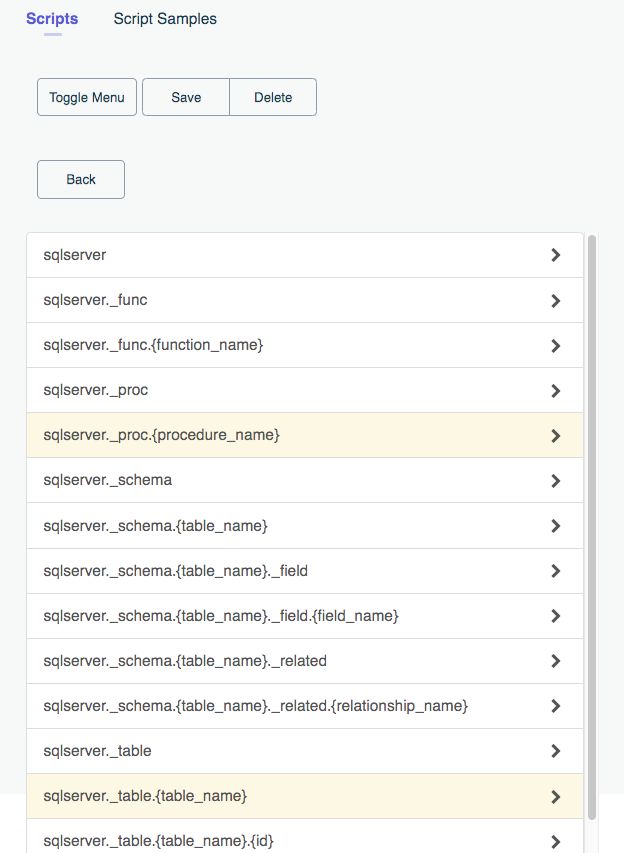 You can apply scripting logic to an entire bucket, meaning it will execute in conjunction with any API endpoint matching that namespace, or you can apply logic to a very specific endpoint. Additionally, you can choose to selectively apply logic to the request or response side of the API workflow, can queue logic for execution outside of the workflow, and can specify that the logic executes in conjunction with a specific HTTP verb (GET, POST, etc.). We'll talk more about these key capabilities later in the chapter.

If you continue drilling down to a specific endpoint, you'll eventually arrive at the script editing interface. For instance in the following screenshot we've navigated to a SQL Server API's customer table endpoint. Specifically, this script will execute only when a GET request is made to this endpoint, and will fire after the data has been returned from the data source.

DreamFactory's ability to display a comprehensive list of API endpoints is contingent upon availability of corresponding OpenAPI documentation. This documentation is automatically generated for the native connectors, however for connectors such as Remote HTTP and Scripted, you'll need to supply the documentation in order to peruse the endpoints via the scripting interface.

Although the basic script editor is fine for simple scripts, you'll probably want to manage more complicated scripts using version control. After configuring a version control (GitHub, BitBucket, and GitLab are all supported) or file system-based API, you'll be able to link to a script by selecting the desired API via the Link to a service select box located at the bottom left of the interface presented in the above screenshot.

Keep in mind these aren't hobbled or incomplete versions of the scripting engine. DreamFactory works in conjunction with the actual language interpreters installed on the server, and allows you to import third-party libraries and packages into your scripting environment.

As mentioned earlier in this chapter, DreamFactory passes the scripts along to the designed scripting language that's installed on the server. This means you not only have access to all of the scripting language's syntax (as opposed to some hobbled version), but also the language community's third-party packages and libraries!

DreamFactory is built atop the PHP language, and uses Composer to install and manage a number of internally built and third-party packages which are used throughout the platform. If you'd like to take advantage of a Composer package within your scripts, install it globally using the global modifier. For instance, suppose you wanted to send out a Tweet from a script. You can use the twitteroauth package to do so:

Once installed, you can use the package within a DreamFactory script via it's namespace as demonstrated in the following example:

If you'd like to reuse custom code within scripts, and don't want to manage the code within a Composer package, you could alternatively add the class to PHP's include path using the set_include_path() function. Once included, you can use the require_once statement to import the class. This approach is demonstrated in the following example script:

The referenced Filter class is found in a file named Filter.php and looks like this:

If you'd like to permanently add a particular directory to PHP's include path, modify the include_path configuration directive.

We're still in the process of migrating scripting documentation into this guide, so for the time being please consult our wiki for more information about scripting:

DreamFactory does not natively support scheduled tasks but you can setup a CRON job for this purpose. Let's create an example that calls an API every minute of the day.

First we will create the script to call the API. One easy way to do so is by navigating to the API Docs tab and copying the cURL command for the appropriate call we would like to make. In this case we have business logic attached to GET on _table/employees that is synchronizing data between two databases. 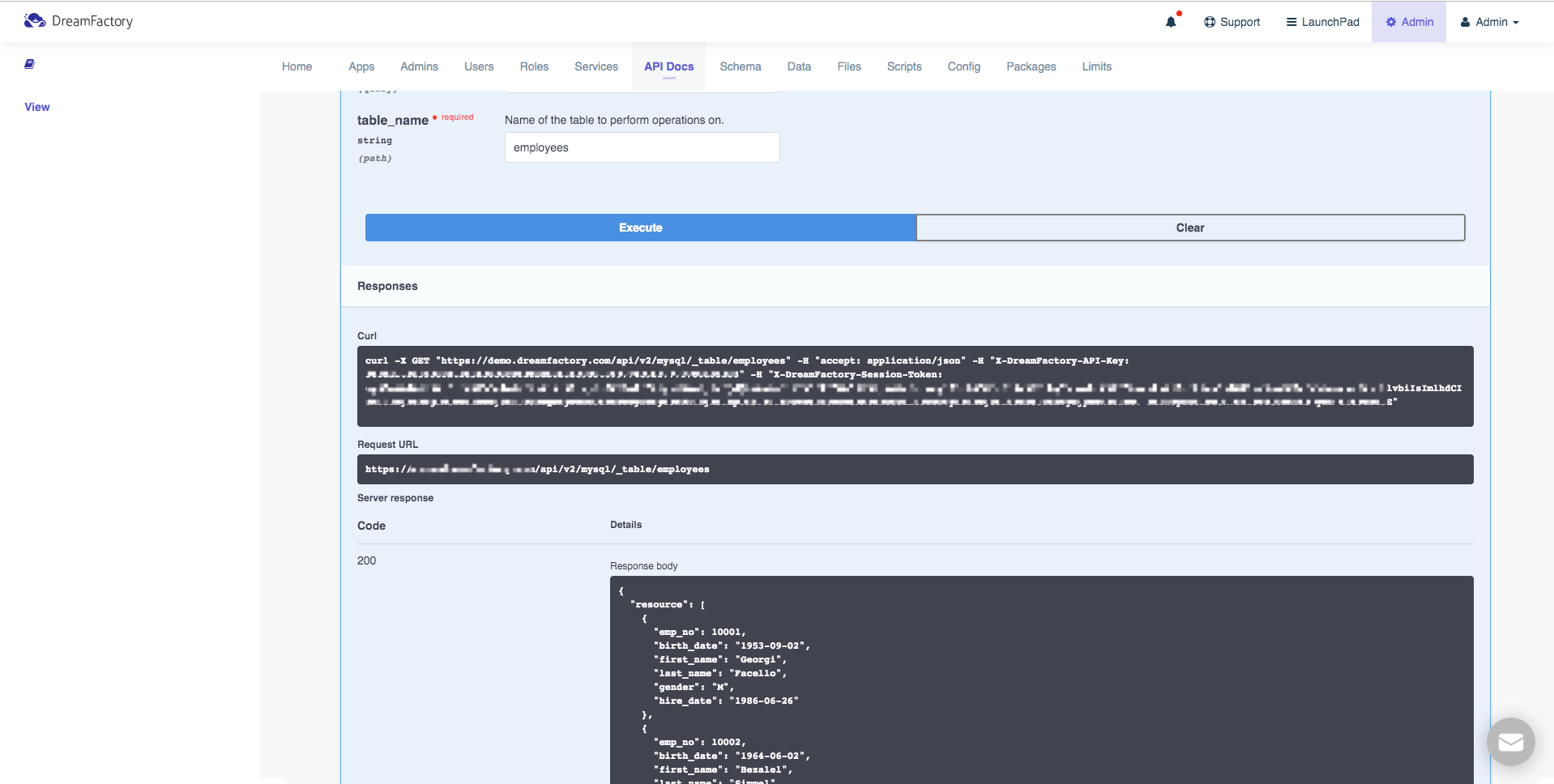 Once we have the cURL command we can convert it to PHP by using this useful tool. After we will create a file named cron.php in the public folder containing the generated PHP code.

This can be broken into 4 parts, the timing, execute PHP, path to script, and the output. In this example the * * * * * means it will run once every minute. The second portion is the path to PHP to allow it to be executed. The important part is now providing the full path to the file you would like to run. Finally you can write the output to a file or discard it, in this case I have set it to be discarded. If you would like to learn more about the structure, check out this article.

Next you will edit the crontab by running the following:

You will be put into the text editor where you can simply paste in your CRON job and save it. Now you have a scheduled task running every minute to call your API!

DreamFactory 3.0 added support for Python 3 due to Python 2.X offically being retired on January 1, 2020. Keep in mind DreamFactory's Python 2 integration hasn't gone away! We just wanted to provide users with plenty of time to begin upgrading their scripts to use Python 3 if so desired.

Python 3 scripting support will automatically be made available inside all DreamFactory 3 instances. However, there is an important configuration change that new and upgrading users must consider in order for Python 3 scripting to function properly. Whereas DreamFactory's Python 2 support depends upon Bunch, Bunch does not support Python 3 and so a fork of the Bunch package called Munch must be used instead.

With pip3 installed, you can install munch:

Once installed, you'll need to update your .env file (or server environment variables) to point to the Python 3 interpreter:

You can find your Python 3 interpreter path by executing this command:

After saving these changes, restart your PHP-FPM and Apache/Nginx service.